You are watching: vice principal luna

Vice Principal Luna is a female human and Princess Luna’s human world counterpart in the My Little Pony Equestria Girls franchise. She is the vice principal of Canterlot High School and younger sister of Principal Celestia.

In the alternate world that Twilight Sparkle travels to in My Little Pony Equestria Girls, Luna appears as the vice principal of Canterlot High School and Principal Celestia’s younger sister. Sunset Shimmer deceives her into thinking Twilight destroyed the Fall Formal decorations. Before she disqualifies Twilight from running for Fall Formal Princess, Flash Sentry provides evidence in Twilight’s favor, and Luna allows her to continue running.

Vice Principal Luna later holds the ballot box after the students fix up the gym for the Fall Formal. At the dance, she bears both the envelope with the winner’s name inside and the Fall Formal crown’s box. Luna is last seen in the film handing Sunset Shimmer a trowel so she can repair the damage she caused to the school with Snips and Snails.

In Rainbow Rocks, Vice Principal Luna accompanies her sister as she oversees the students working on signs and posters for the CHS Musical Showcase.

After the Dazzlings arrive to the school, the Rainbooms try to warn Celestia and Luna about their true nature, but by the time they are reached, they have already been hypnotized by the sirens’ song. The two principals later serve as the judges for the Battle of the Bands, and the Dazzlings hypnotize them and coerce their decision in favor of the Rainbooms instead of Trixie and the Illusions.

In Perfect Day For Fun, Vice Principal Luna watches the Rainbooms’ concert and poses for a smartphone photo.

In Friendship Games, Vice Principal Luna first appears beside her sister during the Canterlot High pep rally. After the CHS Rally Song, she tasks Sunset Shimmer with making sure magic stays out of the Friendship Games so the Wondercolts aren’t accused of cheating.

When the Shadowbolts of Crystal Prep Academy arrive at Canterlot High, Luna warmly greets Dean Cadance. She, Celestia, Cadance, and Principal Cinch also serve as the judges for the Friendship Games. Luna is last seen in several photos during the film’s closing credits, dancing in one and laughing with Cadance in another.

Vice Principal Luna makes a non-speaking appearance in All’s Fair in Love and Friendship Games, writing notes during the Friendship Games tryouts. In Photo Finished, she tasks Photo Finish with taking student photos for the Canterlot High yearbook. She later learns that Photo Finish has been forceful with her photography, but she is impressed by the resulting pictures. In A Banner Day, she tasks Flash Sentry, Micro Chips, and Sandalwood with making a banner to welcome Crystal Prep Academy to the Friendship Games. When she returns later, she is impressed by the three’s collaborative work, unaware that it was the result of their squabbling.

In My Little Pony Equestria Girls: Legend of Everfree, Vice Principal Luna serves as a chaperone alongside her sister Celestia during Canterlot High School’s field trip to Camp Everfree. She and Celestia are stated to have gone to Camp Everfree themselves when they were younger, and they have fond memories of the camp and contributing a stone sundial as their traditional camp gift.

In Subs Rock, Principal Celestia gets a phone call while teaching a class and asks if Vice Principal Luna cannot handle it. After the response, she leaves the class to run an errand.

In Forgotten Friendship, Vice Principal Luna appears in a yearbook photo with Celestia during the song We’ve Come So Far. She also makes a brief cameo at the end stating “no student parking in the faculty lot”, as a callback to what Sunset said to Princess Luna in Equestria.

In Sunset’s Backstage Pass, Vice Principal Luna makes a background appearance walking near the food trucks at the Starswirled Music Festival with her sister during the second time loop of the festival’s first day.

Vice Principal Luna briefly appears in “Blizzard or Bust”. She is almost fooled by the girls’ attempt to fake a snow day, but is convinced otherwise by Cranky Doodle. In “Winter Break-In” and “Dashing Through the Mall”, she appears walking in the mall with her sister.

Vice Principal Luna appears on pages 39-40 of the My Little Pony Annual 2013 comic, hesitantly allowing Pinkie Pie to rally the students during the Wondercolts/Shadowbolts soccer game.

Two dolls of Vice Principal Luna have been released for My Little Pony Equestria Girls: a cheerleader doll that is packaged in the Canterlot High Pep Rally Set, and a deluxe “Through the Mirror” doll with accessories, guitar, and microphone.

Much like her Alicorn princess counterpart, Vice Principal is firm yet fair and understanding. Unlike her mellow-voiced sister, she speaks and conducts herself authoritatively, and she keeps her office dimly lit. Luna is not lenient in delivering punishment to the students, as shown in her interactions with Twilight Sparkle, Sunset Shimmer, and Photo Finish.

In the third film, Luna is on very friendly terms with Crystal Prep’s Dean Cadance, a considerable far cry from how she views the haughty Principal Cinch. 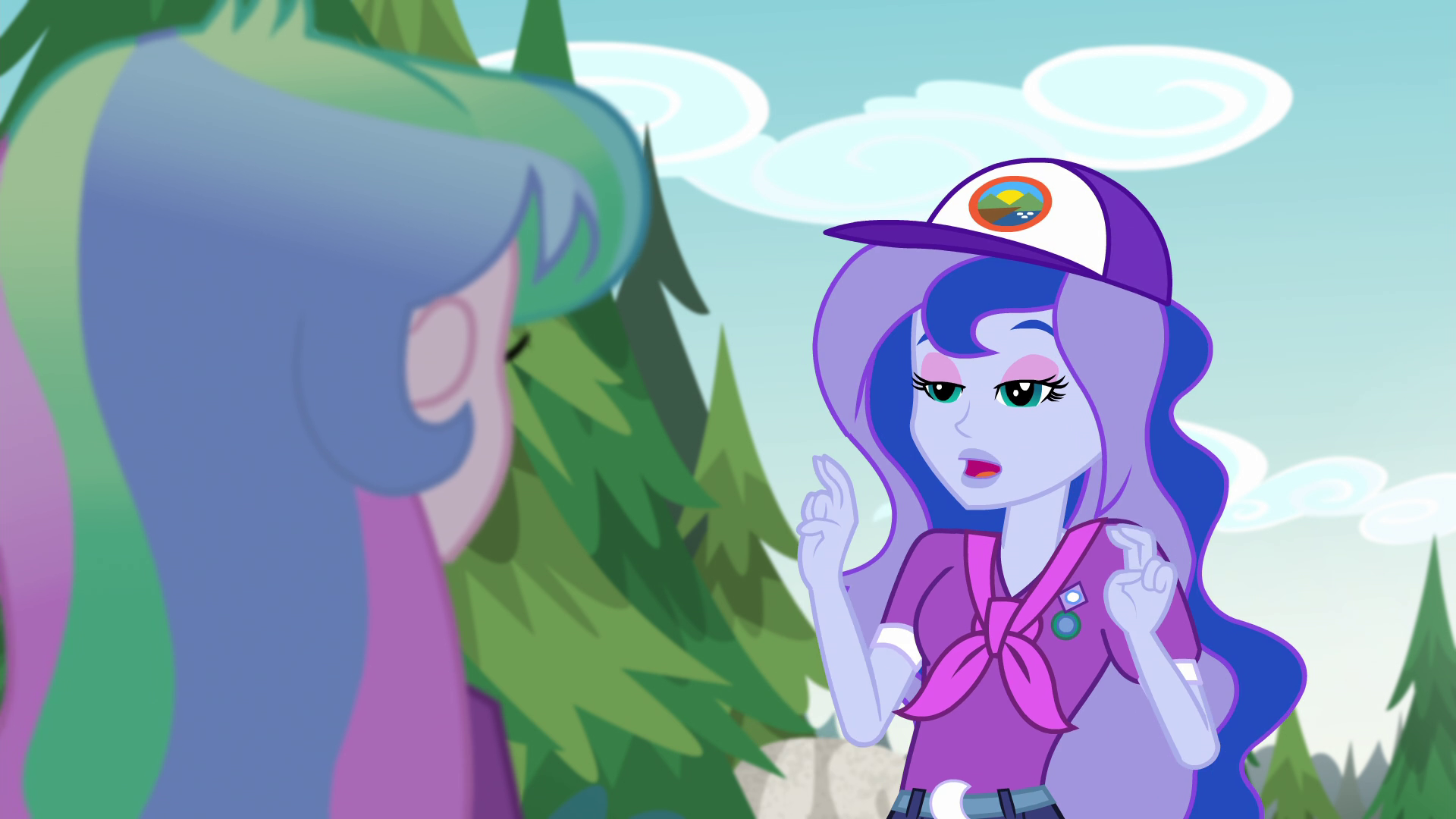